The Department of Mathematics came into being in 1960. Fifty years down the line, it has had much to feel happy about. It has had a faculty committed to the cause of excellence and also students—scores of them—who have brought glory to it by their brilliant academic performance. During the period 1985-2010 alone, several 1st classes apart, 7 students of the Dept. stood 1st in the 1st class in Calcutta University exams, one of them securing the First position among all the science graduates of the University (1997). This speaks volumes. From 2009 the Dept. restructured its syllabus and focus to the then requirement of Academic Autonomy granted to our college by the UGC. Naturally from this period onward our boys have been writing the examinations conducted by our college, whence their success and achievements may be found as reflected in several pan India entrance examinations, like that of IIT, ISI, IISc, TIFR, IIEST, IISER, CMI, HCU, ISM, CU, JU, RKM-VERI etc towards progression into higher studies. The department takes much pride in the fact that the faculty lists of a good many number of these Institutes of our country, where higher studies and research in mathematics is undertaken, now features quite a few names of our ex-students.

The Department started with eight to ten boys on its rolls. These boys, already into their second year at Dinabandhu Andrews College (Garia), decided to forgo a precious year of their career and join the fledgling Department of Mathematics here. The first faculty comprised four teachers Sri Baidyanath Basu, Sri Sudarsan Das, Sri Rasik Chandra Chakraborty and Sri Gobindadev Bhattacharya. Sri Gobindadev Bhattacharya was the first Head of the Dept. The Dept. was soon joined by Dr. Yudisthir De, Dr.Nanipada Bhanja, and a little later by Sri Makhanlal Nag who succeeded Sri G. Bhattacharya as HOD and served as Vice-Principal of the College till his retirement in 1979. The Dept. moved from strength to strength as years rolled by. From the very beginning the Dept. had the privilege of having some well-known teachers agree to teach here part-time, thanks largely to the initiative taken by Dr. Bikas Chandra Sanyal, the then Prof-in-charge of our College, whose great mentor was Swami Lokeswaranandaji himself. The Dept. will and does gratefully remember Sri Ramkrishna Ghosh (St. Xavier’s College), Sri Hemendra Kanta Ganguli (formerly of Scottish Church College) and Sri Murari Mohan Roy Choudhury (formerly of Presidency College and CU) and Sadhan K. Mapa (Presidency College) and Sri Nalini Ranjan Roy (Dept. of Pure Maths. C.U.) for their services to and affection for the Dept. They were the boost the Dept. needed for forging ahead in vigour. In continuation of this tradition the Dept. gratefully acknowledges the academic help and selfless service rendered by a number of eminent scholars in recent years. The list includes Prof. (Dr.) M.N. Mukherjee (Dept. of Pure mathematics, CU)  and Sri Samar Ghosh, IAS (ex Chief Secretary Govt. of WB) among others. No annals of the growth and development of the Dept. can do without a loving and respectful remembrance of Dr.Sudarsan Das who joined the Dept. in 1961 and was its Head till his retirement in 1995. He was an outstanding teacher the memory of whose unique style of exposition left an indelible mark on the minds of his students. His students loved him and held him in the highest esteem. Affable, soft-spoken, affectionate, he served the Dept. with exemplary dedication. He was a good actor and directed many plays put on the boards during college functions. His superannuation in 1995 marked the end of an era in the history of the Dept.

The role of vanguard towards our journey moving ahead was thereafter taken by Dr. Yudhushir De (1995-1996), Dr.Nanipada Bhanja (1996-1998) and then by Dr. Bijoy Kumar Bera, an alumnus of our Dept. (1971-1974) who joined the service in 1979. Dr. Bera headed the Dept. from 1998 to 2010 and played a significant role in sustaining the upward mobility of the Dept. and enhancing its reputation. Post retirement (2010), he has been appointed Deputy Controller of Examinations of our College and the Dept. is still receiving his invaluable guidance and active participation in teaching as well. Dr. Nurul Islam, another alumnus (1974-1977) of this dept. joined the service in 1982 andtook the baton of Headship from Dr. Bera 2010. Actively engaged in UGC-DST-sponsored research projects, Dr. Islam has successfully co-guided two students towards their Doctoral degrees,one each from CU and JU. Two others, registered as Doctoral students at CU are doing their research under his guidance at present. After his retirement in 2016, he is now actively involved with the Dept. as Prof. N.N. Biswas Chair Professor. From 2016 he also holds the coveted post of Co-ordinator of the Vivekananda Centre for Research, the research wing of our College, recognized by CU. With a heavy heart, the Dept. acknowledges the peerless service rendered by one of its relatively recent faculties, Sri Partha Pratim Basu, who joined in 1999 and whose sudden untimely demise in 2019 left all of us shocked. Apart from scholastic reasons, he will be remembered by his students and colleagues alike for his jovial and ever youthful student friendly nature,that was loved by one and all. The present faculty of three full time members, Dr. Parthasarathi Mukhopadhyay (1997 – ) and Dr. Pulak Samanta (2019 – ), headed since 2016 by yet another alumni (1982-1985) Dr. Nanigopal Mandal (1997- ) has been putting in their best efforts to keep up the tradition of excellence set up by their predecessors. In this endeavour the Dept. gets useful support from some Guest faculties like Mr. Dipak Roy and Mr.Biswadip Pal, who is presently holding a Chair Professor post created out of an endowment in the memory of Prof. N.N. Biswas. Dr. Parthasarathi Mukhopadhyay has a lot of solid achievements to his credit. He visited Bangkok, Hongkong, Berlin, Madrid and Budapest (Hungary) on invitation to present talks/papers. Both Dr. Mukhopadhyay and Dr.Mandal have several books on mathematics to their credit. Several ex-pupils of the Dept. are occupying top faculty positions in institutions of higher education in our country. Mention must be made in this connection of Dr. Imran Habib Biswas (TIFR, Bengaluru), Dr.Ujjal Koley (TIFR, Bengaluru), Dr. SanjoyPusti (IIT Mumbai), Dr. SumanKundu (Vanderbilt University, Nashville), Dr. AshishMondal (IIT Kanpur), Prof. Pravash Roy (CURetd.), Professor Saktipada Ghorai (IIT, Kanpur), Dr.Ranjit Dhar (Ex-Registrar, Vidyasagar University), Dr. Sunil Kumar Maity (Dept. of Pure Maths. CU), Dr.Anjan Bhunia (VisvaBharati) and Professor Prakash Chandra Mali (JU). The students of the Dept., apart from their pursuit of academic excellence, have always shown a keen interest in the different co-curricular and extra-curricular activities of the department in particular and the college as a whole.The Dept. does not rest on its laurels. It continues its efforts at further excellenceand looks forward to a brighter future in the current CBCS regime, to which it has geared up under the dynamic leadership of  Dr. Mandal.

The objective of the Mathematics Undergraduate Program is to provide learners with a wide knowledge of mathematics that includes logical reasoning, generalization, abstraction, and formal proof. Program courses teach learners how to create, analyze and interpret mathematical models and communicate sound arguments based on mathematical logic and detailed analysis of data.

Why Major in Math? 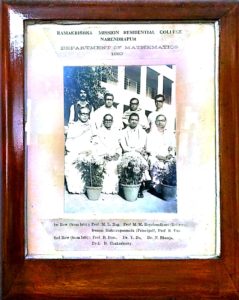 The Department boasts a good relationship between student teachers, with professors always being accessible to students, and students initiating attention through spontaneous love and regard.

Every year, a good number of students of RKMRC  have been admitted to integrated Ph.D., M.Sc., M.C.A. programmes of premiere institutes like TIFR,CMI, I.I.T. s, I.S.I., I.I.Sc. , IISERs and Central Universities and so on.

The department has an uninterrupted internet facility with its own computer LAB. The ratio of students and PC’s is nearly 1:1.

ICT assists teachers in interacting with students. It helps them with their teaching preparation, providing feedback. ICT helps teachers access institutions and universities, NCERT, NAAC NCTE, UGC, etc. It also helps in the effective use of teaching-learning process ICT software and hardware.